The TBT Jr Players are pleased to announce that this year’s production will be the recent Broadway hit, “Bring It On: The Musical”. Performances will be in the Temple social hall on Saturdays, December 7th and 14th at 7:00 P.M. and Sundays, December 8th and 15th at 3:00 P.M.

We are proudly entering our 48th year here at Temple B’nai Torah. It all began in 1971 as the legacy Suburban Players mounted their debut production of Rogers and Hammerstein’s Carousel. Evolving over time, first into the Suburban Junior Players and then the TBT Jr Players, every Autumn we have provided an opportunity for the youth of the Temple and the local community to participate in the performing arts. Our recent productions include Little Shop of Horrors; Guys and Dolls; 13 – The Musical; and last years’ very successful All Shook Up!

This year’s production of Bring It On: The Musical is bitingly relevant, sprinkled with sass, and inspired by the hit film. It will take audiences on a journey into the competitive world of high school cheerleading, while exploring the complexities of friendship, jealousy, betrayal and forgiveness. Created by some of the freshest and funniest creative minds on Broadway, Bring It On features an original story by Tony Award winner, Jeff Whitty (Avenue Q), music and lyrics by Tony Award-winning composer, Lin-Manuel Miranda (In the Heights, Hamilton), music by Pulitzer- and Tony Award-winning composer, Tom Kitt (Next to Normal), lyrics by Broadway lyricist, Amanda Green (High Fidelity), and was nominated for the Tony Award for Best Musical.

Our cast is made up of young performers, ages 10 thru 18. They, along with our production team, start rehearsals in September, devoting 3 days a week to making sure they put on the best show they can. All to show their love of the arts, and to support our temple.

We are thrilled to welcome back our entire 2018 production team:
Director, Rob Kramer. This will be Rob’s 5th show with the TBT Jr Players as he has previously directed the highly successful Little Shop of Horrors in 2015, Guys and Dolls in 2016, 13 – The Musical in 2017 and All Shook Up in 2018. Musical Directors, Brian Sweeney and Michael Janover. Brian and Michael are well known in the Long Island theater community having served as musical directors on numerous productions around the island. This will be Brian and Michael 3rd show with the TBT Jr Players. Choreographer, Meghan Nieland. Meghan, who has previously choreographed several LI Cabaret productions, joined us for a successful debut with last year’s All Shook Up.

We look forward to you joining us this December. Proceeds from the performances go to the Temple and Temple Stage Fund. Tickets are $18 for Adults, $12 for Seniors (55 and over) and Children (12 and under). Tickets can be reserved on Sunday mornings in the Temple Lobby, by calling 516-557-6288, or on the day of the performance. Come support our Temple and our youth. We look forward to seeing you there! 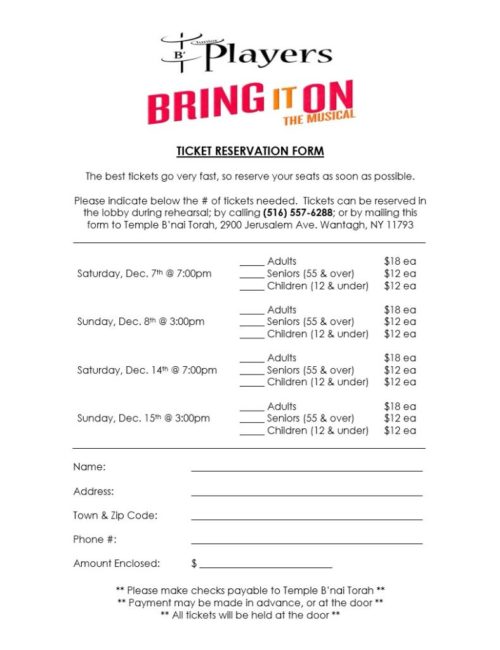 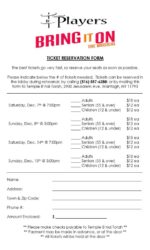